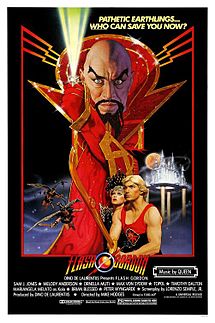 For my next venture into B -movies and cult favorites, I decided to sit and watch Flash Gordon. I recently saw Bohemian Rhapsody. Clearly they couldn’t cover everything and purists felt as it there was much left out to protect Freddie Mercury’s image. I didn’t mind that actually. To often, I feel like all celeb movies do is try to show us everything that was wrong rather than let us enjoy what we love about things.

But, I must say, they make no mention of Queen’s contribution to Flash Gordon.

First, The Flash Gordon theme song is an ear worm that won’t go away for days. Second, I feel a lot more forgiving towards Battle Beyond the Stars now.

Flash Gordon was a comic strip created in 1934 and had all manner of serials, early movies, etc. There was a 1996 TV series I vaguely remember and a 2006 TV series which I do remember. It wasn’t terribly remarkable-but to be fair- I’m not a Flash Gordon fan. It’s never  been a character I followed much, so there wasn’t much emotional investment. I realize it’s place in pop culture but that’s about it.

Let’s get to the movie summary (which is apparently close to the original serial):

Space Supervillian Ming the Merciless is going to destroy earth by causing natural disasters. A football player named “Flash” Gordon is traveling on a plane with a travel agent named Dale Arden. The plane is hit by a meteorite, falling into the lab of Dr. Hans Zarkov who is building a spacecraft because he believes in a coming alien invasion. Through convenient plot devices, Flash Gordon and Dale Arden end up traveling another galaxy  with him. They are taken prisoner by Ming the Merciless and paraded in front of a group of colorfully dressed aliens with bizarre headpieces. Ming’s daughter Princess Aura decides she likes Flash, but has a thing going with Timothy Dalton aka Prince Barin. There is a lot of glitter and orange. Flash fights off a bunch of aliens with football moves, but is captured and sentenced to death. Dr. Zarkov is captured for mind experiements. Dale is dressed up in a tacky dress to join Ming’s harem. Flash is executed, but it is faked and Aura frees him.

This is where I got a bit confused. Aura is taking Flash to Prince Barin. Flash communicates telepathically with a machine on Aura’s spaceship to let Dale know he’s alive and will rescue her. Another group of people steal Zarkov’ s memories. Aura and Dale are chased by the Hawkmen (another group of aliens). The arrive at Prince Barin’s land, but then Flash and Barin fight each other. The Hawkmen capture all of them, but they escape. And there’s a lightning shield that does something but they have to destroy it. Then Barin and Aura will work with the Hawkmen to overthrow Ming the Merciless.

And there are Lizard Men because there must be in any B-grade SF movie.

Battle Beyond the Stars did have a clear narrative. It may have been clumsy in its delivery but I could watch the movie in one sitting because I felt like it was going somewhere. Flash Gordon was filled with running and yelling and bright colors and weapons and no real direction. I got impatient and had to stop midway and pick it up later. I think they film makers were trying for a parody of SF or some comedy, but it never quite fit. I wasn’t entirely sure what I was watching. If I had to choose, I’d rather watch Battle again.

If you have any good cult or B-movie suggestions, I’d love to hear them. I think Krull might be up soon:)