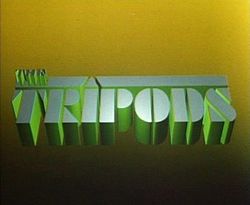 The Tripods TV series is a 1984-1985 YA SF series based on a series of books The Tripods by John Christopher. It ran for two seasons on the BBC. There are many changes from the books to the tv series though the basic concept remains the same.

The show begins in the future 2089. We see a pre-industrial version of England. Horse drawn carriages, family farms, etc. A young man in a suit is being congratulated by his friends and family for his “capping “ceremony. He takes off his hat to reveal his shaven head. Out of the sky comes a giant metal tripod, that lands in the lake and  pulls the young man up inside.

Apparently, the tripods are controlled by the Masters, an alien race that controls humanity through capping. When you turn 16 (14 in the books) you get a metal implant in your head-cap-that keeps you from independent thought. It gets rid of violence and greed and what not, but also free will. It also seems to dumb down society-hence the pre-industrial world. Humanity has largely forgotten technological progress. We later find out that many countries are now isolated to the point that no one travels outside their own country, learns another language, or even has the same currency. The caps create a xenophobia which prevents mixing with any ‘outsiders’ and this helps the aliens maintain control.

The focus is on two young men, Will and his friend Henry, who are almost at the age to be capped. Will is apprehensive about capping and what it does to people. They meet up with some of the uncapped/ those for whom capping didn’t work- who live as vagrants. One vagrant, Ozymandias, convinces them that they do have something to fear from being capped and need to escape. On their journey, they begin to figure out their idyllic world is based on mind control and they begin to resist it. There are also agents of the tripods, which chase the boys as Will, Henry, and a new friend  try to convince other young adults to join in and resist the Masters.

The books are a bit different-a prequel book explains the beginnings of the invasion and how the world came to be. The TV series ended without completing the book series due to budget issues.

On the whole, I found the premise intriguing. It does look dated…the clothes and dialogue are supposed to be pre-industrial but even then the episodes and dialogue can be a little stilted and slow. I don’t think a young adult would sit through it now especially with a diet of  faster paced shows.  It is interesting to watch if you want to round out your viewing of the cult classics- and the books hold up fairly well.

3 thoughts on “SF Obscure: The Tripods”